🎥 Watch the preview of the course above!

⚠️ If you click on the words in blue & dotted, you are able to see their meaning.

Improve your English language skills by looking at the life and works of William Shakespeare and his enduring popularity.

2016 is the four hundredth anniversary of the death of William Shakespeare. How did this English playwright come to be loved and studied all over the world? This course looks at the life of Shakespeare and the impact that his work has had over the centuries up to the present day.

In the next six weeks, you will also meet several actors who have appeared in Shakespeare plays all around the world, including in Africa, the Middle East, Europe and Japan. Travel from his Birthplace in Stratford-upon-Avon to the Globe Theatre in London, from where he secured his central place in English literature.

We will look at five of Shakespeare’s plays with the help of actors and experts from around the world. They will explain and explore the universal themes Shakespeare addressed in his work.

The plays are: Romeo and Juliet, Hamlet, Much Ado About Nothing, The Tempest and Macbeth.

Along the way we’ll look at some of the words and phrases that Shakespeare introduced to the English language which are still in use today. Quizzes and language explanations will help you practise your own English. Lead educator Anthony will guide you through each week’s content.

Phrases that came from Shakespeare

Shakespeare did not invent the word “PIZZA” ;) ‘Eyeball’ appears in A Midsummer Night’s Dream, ‘ladybird’ in Romeo and Juliet and ‘elbow’ was used as a verb for the first time in King Lear!

April 23, St George’s Day – which is also thought to be the date he was born!

BBC Learning English will start a new series as well!

To sign up for this course, go to www.futurelearn.com/courses/explore-english-shakespeare

1. What other facts do you know about Shakespeare that you find amusing and fascinating?

2. Are you willing to take this course? If so, let me know! It’s going to be great to engage in conversations about this amazing opportunity! 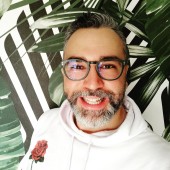 I have been an English teacher since 2004 and have more than 15,000 hours of teaching experience. With lots of love and care for students' development, I set up my own private tutoring school (EYE!nglish) at the age of 23 and since then have expanded in ways to teach English globally. I am eager to be able to share with you the joy and fun of improving your language learning. Activate Your English is my most recent project and I look forward to seeing you around and to connect, helping you take your English to the next level!

What was Queen Elizabeth II doing at your age?

DO versus MAKE – learn how to use the collocations

Take your English to the Next Level!

Learn what we have to offer in our online course!